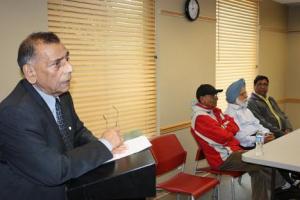 Dr. Darshan Gill, a progressive and secular Punjabi writer who opposed religious fundamentalism in Vancouver lost his battle with cancer and passed away at Surrey Memorial Hospital on June 10, 2011.

Gill was the former editor of Canada Darpan, a Punjabi biweekly that gave a voice to moderates who were condemning extremism within the Sikh community during 1980s.

He founded Canada Darpan on November 1, 1982. This date was deliberately picked as it coincided with the anniversary of the founding of Gadar, a newspaper launched by secular Indian revolutionaries who fought against British imperialism.

He was a native of historical village Dhudike in Punjab. Dhudike was known as a village of Gadarites. Dr. Gill, who came from a progressive background had worked at Nawan Zamana, a leftist newspaper published in Punjab, India, before he immigrated to Canada in 1972.

After his arrival in this country, he was employed at sawmills in the B.C. Interior. He moved to Vancouver in 1982.

His newspaper was critical of Sikh fundamentalism and published articles written by prominent moderates, including Ujjal Dosanjh, who went on to become B.C.’s premier and a Liberal MP. Dosanjh was physically attacked for his liberal views in February 1985. During that era, Gill received threatening calls asking him to stop running Dosanjh’s articles. Undeterred, Gill continued to publish them. He also testified in a trial against suspects in the Dosanjh beating case.

The fundamentalists also tried to dissuade people from reading his newspaper; often copies of Canada Darpan were stolen and destroyed during those days. He narrowly escaped a physical assault when he went to attend a function at a Sikh temple in New Westminster. In 1987, his Surrey home was attacked with a firebomb, but nothing untoward happened to him.

In 1989, he sold Canada Darpan due to financial challenges.

Gill also hosted Sahitnama, a literary program on Radio India every Sunday. He has edited 20 books and translated three books from English into Punjabi. The Punjab government granted Gill a literary award for his contribution to Punjabi literature abroad.

He was first diagnosed with cancer in 2007. Although his right kidney had been removed, he remained healthy until last summer. But the cancer had since invaded his right lung.

Gill remained in high spirits while struggling with cancer. “I will always be opposed to fundamentalism till the end of my life,” he said in one of his last interviews.

His funeral will be held at Five River Funeral Home, River Road, Delta at 12:30 pm on June 18. Later special prayers will be held at the Ross Street Sikh Temple, Vancouver at 3 pm.

One comment on “End of an era: Dr. Darshan Gill passes away”