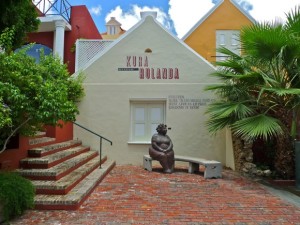 The Kura Hulanda Museum is located in the Otrobanda area of Willemstad, the capital of Curacao in the Netherlands Antilles in the southern Caribbean. The museum is part of a larger complex comprising shops and a hotel, all of which were the brainchild of Dutch philanthropist Jacob Gelt Dekker.

The museum grew from his personal collection of artifacts and is dedicated to telling the story of slavery. The museum is built around a former mercantile square (Kura Hulanda means “Holland courtyard”), where the Dutch once sold slaves.

The first part of the museum is about the history of the Lands of Abraham, the fertile crescent of the Middle East. The next stop is the Mama Africa sculpture followed by the start of the slavery exhibition. The museum illustrates the fate of African slaves in Latin America, the abolition of slavery in the USA and slavery today. Many items from the great African empires of Ghana, Mali, and Ethiopia are also on display, with separate sections that show the artistry of the Dogons of Mali and bronzes produced in Benin.

However, the main part of the museum deals with the history of slavery. First, there are some jaw-dropping facts to read: slavery began in the 1440s with the full knowledge of the Roman Catholic Church. In 1441, a Portuguese sailor Antum Gonzales seized two Sanhaja Berbers on the Rio d’Oro coast and along with seven other captives took them back to Lisbon. He gave the Berbers to Pope Pius II. In 1455, Pius II authorized Portugal ‘to reduce to servitude all infidel people’ and directed that baptized Africans should not be traded, but they could be enslaved.

The exhibition states that greed became the primary motive of the Atlantic Slave Trade, which was mainly why it lasted over 400 years. This Slave Trade became the largest employer in Holland and Portugal from 1500 – 1750. According to the museum’s information (http://www.kurahulanda.com/slavery) one of the reasons David and Alexander Barclay were able to establish Barclay’s bank in 1756 was because of the profits made from their slaving business while Lloyds of London insured slave ships and their cargoes.

However, the Atlantic Slave Trade wasn’t the only slave trade there was. Barbary raiders from North Africa captured more than 350 British registered ships in the English Channel between 1674 and 1680. In total almost 600,000 Europeans were sold in slave markets in North Africa in the 16th and 17th centuries.

African people fell into slavery in many different ways. They were rarely kidnapped by Europeans, who instead bought them from local rulers or traders. Roughly 34 percent of the Negros became slaves due to wars, 30 percent were kidnapped by other Negros during incursions, 11 percent were sold as slaves after being condemned for an imaginary crime and about 7 percent was sold as slaves by a relative or an acquaintance. The other 18% were in the wrong place at the wrong time.

Not all slaves were sent across the Atlantic – away from the African coast slaves were bartered for salt, an expensive commodity for which some men were prepared to exchange one of their wives or children. Sometimes a family sold a child when it had nothing to eat.

Kings along the coast committed raids on each other’s villages on a regular basis to obtain slaves. During such raids old men and women and little children were killed without mercy. The same happened to slaves that could not be sold.

The Kura Hulanda museum also highlights how harshly slaves were treated before they were bought by Europeans. Many slaves had long journeys from the African interior and thousands died from exhaustion, lack of food and from diseases such as dysentery. At the end of the eighteenth century it was estimated that half of the prisoners did not reach the coast. Once the slaves arrived at the coast they might have to stay for up to five months in the dark and overcrowded cells in the slave forts. These were built along the coast with the complete agreement of the local African leaders. The companies that made use of the fort had a monopoly on the local slave trade but were also expected to defend the locals against attacks by other African tribes.

The museum also covers the transportation of slaves to the Americas and their terrible travelling conditions on this journey. They would sit in the hold with their knees bent, with someone in front of them and someone behind them so they had no room to turn or to lie down. This closeness meant that diseases such as dysentery and smallpox spread rapidly. It also led to breathing difficulties in the lower holds where there was little access to fresh air. The stench of perspiration, blood and faeces must have been unbearable.

Few slave captains made more than four journeys from the African coast. After a couple of trips most captains would have earned enough money to buy their own ship because of what’s called the Triangular Trade. Ships carried goods such as guns, iron chains, yokes, and branding irons from Europe to Africa. The cabins were sometimes occupied by missionaries. The same ships carried slaves from Africa to the Caribbean and the USA where they sold the slaves. With this money they bought sugar, rice and cotton and sailed back to Western Europe.

The ordinary seamen on slave ships were often petty criminals who had been doped in pubs and lured aboard. Liverpool was especially notorious for such practices – many innkeepers made an extra income from slave captains. It’s important to remember that the officers on board the ships treated sailors at least as badly if not worse than they treated the slaves. Sometimes the captain ordered the meat of the sailors to be given to the slaves. A dead slave represented loss of money, a dead sailor just the loss of two hands to work the slave-ship.

Most slave ships transported between two and four hundred slaves and the average passage took about two to three months. Before going aboard, the slaves were branded and baptized by company ministers at the forts. Once on board, male slaves were all put in irons and shackled together to prevent mutinies and to stop individual swimming ashore. Women and children were often allowed to go freely about the ship although there wasn’t much room on the ship because they were fully loaded with slaves and food and water for the long ocean voyage.

There was at least one insurrection every eight to ten journeys. Most of these came when the ship was either still close to the African coast or at the time of embarkation. They were usually put down by the crew without serious losses to themselves and the leaders were always punished harshly and in most cases killed.

The Kura Hulanda museum is a harsh introduction to the misery of slavery and shows that the slave trade covered more of the world than most people will have appreciated.

Julian worker is a widely published travel writer and photographer from UK who is now based in British Columbia, Canada. His photographs have appeared in travel guides published by National Geographic, Thomas Cook and The Rough Guides. More on Julian: http://julianworker.com/