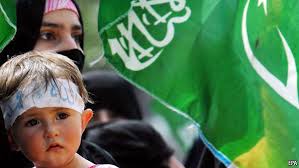 The case for separation of religion and state in Pakistan has been made by atheists, agnostics and non-believers.

I argue that case, as a believer.

In Islam, God is the supreme authority. His Will creates, sustains and destroys the Universe. He is the ultimate judge of human beings based on their thoughts, words and deeds.

What need has this Almighty God for mortals to legislate in His name? What does it benefit Him whose Law is eternal and universal to have the laws of men perpetrate injustice and cruelty?

The teachings of religion on love, benevolence and justice can better politics; but why otherwise corrupt the sanctity of religion with blood, power and greed? Why further divide humanity “in creation of one essence and soul?”

Why do Pakistanis need a state to save their souls when it does not fill their bellies? What need has Islam or God for the Hudood Ordinance, the Blasphemy Law and the murder of its people in His name? What has sixty-eight years of Pakistan done in the name of Islam and God?

The Persian sage and poet Sadi remarked in the Gulistan:

Oh! Though above all human though supreme,
Above our every word or deed or dream,
Thy service closes and we quit the Mosque
Yet of Thy meaning, scarce have caught a gleam

If the mosque has failed to bring Pakistan closer to Islam or to God, then nor will all of the Islam-pasand politicians, mullahs and mujahideen of the Land of the Pure.
..
Sign this petition for a secular Pakistan
Separate Religion from State. Remove Article 2 of the Constitution of Pakistan. Declare Pakistan to be a Secular Democracy
.
.