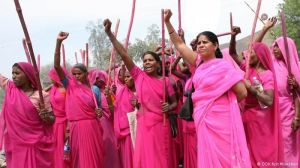 The days leading up to International Women’s Day saw the screening of “India’s Daughter,” a documentary on the rape of murder of Jyoti Singh in New Delhi in 2012. Singh’s rape and murder provoked a national catharsis of demonstrations, clashes with police and soul-searching on how to better protect India’s (middle-class) women from sexual predators.

Singh did not come from privileged circumstances, but she had the aspirations of a middle-class woman. That made her worthy enough of respect of the middle-class. There were however no moments of silence for those indigent Indian women who are raped daily, no national march to fight for the rights of the dispossessed in rural India, the majority of the country’s women.

The Gulabi Gang is a woman’s movement that was started by poor women in 2006 in Bundelkhand, Uttar Pradesh. It began as a band of women who humiliated and punished men for abusing their wives. Today, it has over 300,000 members and fights against dowry death, rape, child marriage and child molestation and caste oppression in northern India.

The Gulabi Gang do not attend classes at Delhi University, read Byron or catch flicks at the multiplex. The antithesis of the modern, enlightened Indian women, they have struck at the heart of patriarchy without the help of NDTV, academia and marches along Rajpath. The fact that this movement has taken place and grown in rural India, tells us that this is where the real battle against violence against women is to be fought if it is to be won.

One comment on “International Women’s Day: The Gulabi Gang”