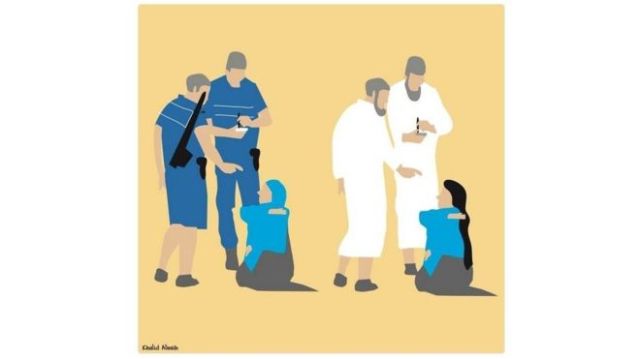 The Muslim women of France are being forced to be free, again.

A few days ago, on a beach in Nice, police forced a woman to remove her burqini. The woman was fined and charged with disrespecting secularism. She stood in the shadow of four police officers armed with handguns, batons and pepper spray. She was gawked at by others, told to go home.

I am not a fan of the hijab, niqaab or any form of face or head covering. I think they are a form of oppression. But it is not my place to tear them off Muslim women. Nor is it the place of a state with all its coercive powers to force women toward freedom by having them remove their clothing or head covering.

Like any law or ideology, French secularism is not neutral. It is the product of French culture, history and society. It reflects the will of the French majority. It did little for its Jewish minorities living in an anti-Semitic French society and culture before World War II, just as it struggles to manage an ethnically and religiously diverse society today.

The Muslim woman’s veil, in particular, has long haunted France. Colonial France saw the veil as the major barrier to the spread of her superior, egalitarian civilization. In the Algerian War of Independence (1954 to 1962), the French called themselves liberators of Muslim women. In 1957, Muslim Algerian women were publicly unveiled as part of the French “emancipation” program.

Then there’s the policing of women’s morality. This, of course, is not unique to Muslim women. In 1907, the first woman to sport a sleeveless swimming outfit in Australia arrested. The two-piece bikini was banned in Spain, Italy and Portugal and denounced by the Pope. In 1967, French women in mini-skirts were stripped by a mob.

And of course, Saudi Arabia enforces the niqaab, Iran upholds the hijaab and Pakistan has its shariah-compliant bra. To veil or not to veil is a question answered by the state, cleric or clan, but rarely just left to the Muslim woman.

Set in a housing project on the outskirts of Paris and amidst a Balzac-like cast of thugs, gang members and drug pushers, Dheepan is raw, dark and moving. Audiard’s direction and storytelling create a picture as close to art and reality as cinema gets. Through the performances of Jesuthaasan, Srinivasan and Vinasithamby, one lives the tears, frustrations and spirit of Dheepan, Yalini and Ilaya. The war in Sri Lanka lives on not just in memories.

The cinematography of Eponine Momenceau deepens the ambiance with the paddy fields and funeral pyres of Sri Lanka to the smashed lighting strips and marijuana butts littering the housing project. In this Fifth Republic, there is no law, no fraternity. Dheepan, Yalini and Ilaya have to fight for a new beginning. In Dheepan, Audiard asks gracefully and frankly whether people can start again. 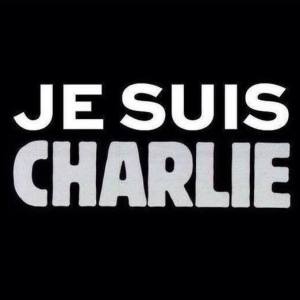 I am Charlie
In protest and condemnation of the slaughter of 10 unarmed journalists of French magazine Charlie Hebdo, their bodyguard, and a police officer, by a faction of religious extremists who were ‘offended’ by the publication’s cartoon depictions of Prophet Mohammad.
Pakistan’s Blasphemy Laws are based on this same thinking where hundreds of non-Muslims and Muslims face brutal lynchings and killings each year from militants claiming their religious sentiments were offended.
The perceived inciting of this ‘religious offence’ is given as a valid reason to shoot, kill, behead, stone, burn, drag- other humans.

I am Charlie
To stand with grieving families and friends now facing trauma of the violent killings of loved ones.

I am Charlie
To strengthen and support progressive movements in France and elsewhere so that this incident is not used to further victimize Muslims, immigrants, People of Color, rights activists and other outspoken or vulnerable groups.

I am Charlie
To show solidarity with Vive Charlie Hebdo! to uphold our right to Freedom of Expression.

I’m Charlie
To challenge the argument that because Charlie Hebdo is seen to be a ‘racist’ publication (or ‘bad’ journalism) feeding into the systemic racism and Islamophobia of French society, we should not be enthusiastic in condemning the killings or going all out in support of the Freedom of Expression movement. This gives me the chills. It reminds me of some of the ‘reasons’ or ’causes’ of rape given to us that are based on the belief that women cause themselves to be raped by wearing provocative clothes or by staying out late at night or any number of things; Or that a child’s playful behavior invites an adult abuser to sexually abuse them. To say that a racist publication was attacked because it purposefully offended religious sentiments of Muslims in France and elsewhere, is actually saying that the victims of violence caused the violence by offending the sentiments of the attackers. Isn’t this the basis of ‘honor’ killings, blasphemy killings, and other hate crimes against women, minorities and under-privileged people in Pakistan? As well, enough victim blaming and shaming happens against underprivileged population groups in Canada. It’s not about the publication or attacked persons nor it is about placing value on them, but fighting the mindset that wants to or needs to annihilate it’s critics.

I’m Charlie / I’m Ahmad
To honor the Muslim police officer who may or may not have been ‘offended’ by Charlie Hebdo but he gave his life defending the journalists.

I am Charlie
To resist and fight the loud echoes in my ‘progressive’ circles scaring people with ‘Islamophobia’ allegations; and, the convoluted thinking of extreme religious fundamentalists who are silencing people by inflicting death.

I am Charlie
To insist on my right to investigate, describe, satirize, humourize and criticize without fear everything that concerns me.

‘I may detest what you say, but I will defend to the death your right to say it.’ —Voltaire

Images and some information from PEN American Center‘s facebook and web pages.
.
.

The controversy over the Charter of Quebec Values got me interested in where Quebec stands as a secular society in comparison to other societies, including the rest of Canada.

STRICT SEPARATION OF CHURCH AND STATE

The “democratic” (rather than ‘republican’) model of secularism prevails in European protestant countries. Protestantism itself began as a dissident movement, giving rise to other dissident sects. The resulting dissidence among different groups in these countries forced the state to eventually tolerate those differences, rather than in France where the struggle between an all-powerful church and the state resulted in the state victorious and an ensuing tradition of anti-clericalism.

Charles Taylor, “Modes of Secularism,” in Secularism and its Critics, 31-53.

Jean Bauberot, “The Two Thresholds of Laicization,” in Secularism and its Critics, 94-136.

Rajeev Bhargava, “What is Secularism For?” in Secularism and its Critics, 486-542.