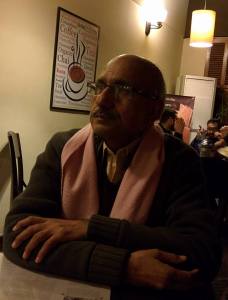 All admiration and support to poet/educator Rifat Abbas for taking this action in favour of his mother language at this year’s International Mother Language Day.

“I’ve no moral ground to accept the award; I refuse it due to three main reasons: being a poet, being a Seraiki nationalist and being a neighbor of small nations struggling against the suppression of Punjab,” said Mr Abbas. Explaining the reasons, he said that being a poet he had not rendered any service for the promotion of Punjabi language but his all services were for the promotion of Seraiki language.
dawn.com/news/1316216/seraiki-poet-turns-down-punjab-award

As a Punjabi writer, i much appreciate his insistence on the three points he has mentioned: that he is a Saraiki language poet who doesn’t like to be packaged as a Punjabi poet; that he is also a Saraiki nationalist demanding independent rights and resources for Saraiki speaking people; and, that the harsh oppression of Balochis and Sindhis being carried out by the Punjabi power-holders can not be ignored.

It is my experience that Pakistan’s Punjabi writers, mainly based in Lahore, hold the few resources available for mother languages in the Punjab, and their bigoted attitude does not allow them to listen to people like Rifat Abbas who for many years are saying that Saraiki is not Punjabi and that it is a distinct language with it’s own culture and geographic location. It’s understandable that Pakistan’s federal and provincial state structures would have a negative view of this position but why is it that Punjabi writers feel offended by it? Perhaps some vested interests and literary hegemonies are preventing us from supporting another writer’s stand for his mother language.

As Punjabis, who are we to judge if a language is a dialect of Punjabi when the representatives and speakers of that language are saying that it’s not? Because not only that Saraiki is not Punjabi but it also does have it’s own culture (a Punjabi, for example, will greet another Punjabi in a different way than a Seraiki will greet another Seraiki) and land. If we don’t acknowledge it, we are putting forward the same colonial concepts and aspirations that make us complicit now on the suppression being carried out by Pakistan’s Punjabi-led state structures against Balochis, Sindhis and Pashtuns- like we were complicit against Bengalis in the 60s and the 70s.

Uddari fully supports Rifat Abbas and other friends in Saraiki wasaib for their ongoing struggle to get recognition and rights for their language and culture.

PUNJABI LANGUAGE EDUCATION ASSOCIATION’S (PLEA)
13th Annual
International Mother Language Day
Saturday Feb. 27, 2016
Time: 3:00 pm to 5:00 pm
North Delta Rec. Centre 11415 – 84 Ave., Delta
❉ Discussions: efforts to have Punjabi language education in
local educational institutions. Mr. Garry Thind from the Surrey
school board will be present.
❉ It is a matter of great pride for all of us that a large number
of Punjabis are part of Canada’s federal government. Is this
going to have any effect on the development and preservation
of Punjabi language in Canada? Surrey Centre MP Randip Sarai
will be present to discuss this.
❉ Young Punjabi learners will share poetry, songs and ideas.
❉ PLEA cordially invites everyone to come and be part of the
annual celebration of Punjabi language.
❉ Free Event. Refreshments.