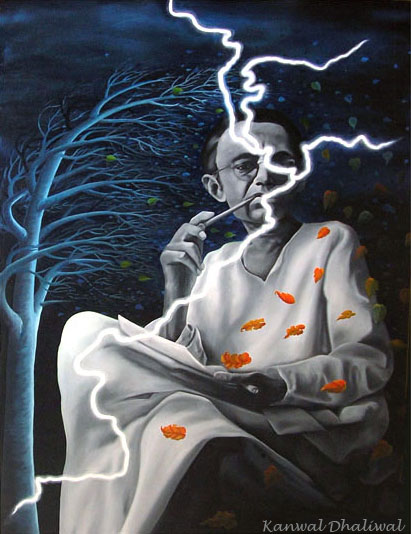 By Kanwal Dhaliwal from Uddari Art

Note:
Children under 12 are strictly not allowed
Mobile phones must be switched off before entering the hall
Doors shall be closed upon commencement of the performance
Consumption of eatables & drinks in the hall is not allowed

MERA RANG DE BASANTI CHOLA
Mera rang de basanti chola is a much deserved and long over-due tribute to one of the most influential revolutionary leaders of the independence movement and the one of the most charismatic sons of the Punjab, But the story does not end with the execution of Bhagat Singh and his comrades on 23 March 1931. The story of this fearless 23-year old revolutionary freedom fighter gets intertwined with some other stories of struggle between defenders of freedom and justice and the forces of darkness and oppression. As the play reveals links with the past and the future, the spirit of Bhagat Singh lives on. His last words were Inqilaab Zindabad. These words still resound in the air of Lahore, we can feel his presence and seek inspiration from the way he lived and died.

Kishwar Naheed is one of those few women who command a kind of respect for their work that continues on to transform into love at some point in one’s life. I have always felt indebted to Kishwar for the face of courage she continued to show as a poet and as a person amidst political turmoils, personal sorrows and social discriminations. From 1970’s in Lahore to 2007 in Islamabad, Kishwar has become stronger, more together, prettier, and even more of a direct person; and, like many Pakistan women, i can say that i have grown to love Kishwar Naheed.

Kishwar was born in Uttar Pardesh in India in 1940, and came to Lahore in the Punjab after the Partition of 1947. From that time on, Kishwar lived and worked in Lahore with some digressions into other cities, and after retirement settled in Islamabad in her cozy two bedroom apartment. Urdu is her mother tongue, and that is the language she basically worked in but her administration role/s at National Centre, National Council of the Arts, Urdu Board and other positions allowed her to develop literary communities that involved both Urdu, Punjabi and other language writers. Kishwar was married to Poet Yousuf Kamran, raised two sons with him as a working woman, and then continued to support her family after his death in the Eighties.

I can not tell you when i first saw Kishwar but i bet it was in the heat of the Seventies in Lahore where Kishwar had already emerged as a poet with two collections of Urdu poetry, ‘Lab-I goya’ in 1968 and ‘Benam musafat’ in 1971; and was the recipient of Adamjee Award for Literature in 1969. From the start, i admired the strength of her voice, poetic and otherwise, in dealing with a sexist social milieu that was geared to strike dissenting women hard.

By 1991, she had published six collections of Urdu poetry, many anthologies, biographies, translations, travelogues and textbooks for children. Later, she won Unesco prize for ‘Dais Dais Ki Kahanian’, a book of short stories for children, and the prestigious Sitara-e-Imtiaz for lifetime achievements.

Here are two of her poems ‘Yes’ and ‘No’ in English:

A delicate awareness of life
Dawned in the desolation of my body.
The deception of the shore’s indifference
And the futility of surging waves.
Every limb is asking:
Now tell us
If you know why a flower blossoms.
I laugh
And create a riot in the garden.

Selling mirrors
In the lap of hope’s mountain,
I was alone reaping losses.
I was tall like the Pleiades,
Was concerned with only me;
Lost in myself

Lonely,
Marching apart,
Self-absorbed,
Self-adoring,
Arrogant,
I hated the glow of yes.
Then, I killed myself,
Drank my blood,
Laughed.
People had never heard
Such frightening laughter.
(Poems translated by Baidar Bakht and Derek M. Cohen for ‘The Scream of an Illegitimate Voice’, Lahore 1991)

Resources on Kishwar:
Kishwar reads her poem ‘Hum gunahgar aurtaiN’ We Sinful Women
Her profile at the Library of Congress
Collection of Kishwar’s Urdu poems
Poems translated by Rukhsana Ahmed
Entry at the Foundation of SAARC Writers and Literature
‘Kishwar Naheed Looks Back’ by Khalid Hasan