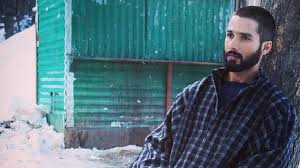 This third adaptation of Shakespeare’s tragedies by Vishal Bhardwaj is not a tragedy in the same way as the play from which it is adapted. The tragedy in “Hamlet” comes from the hero’s fatal flaw, his indecision whether to avenge his father’s murder and the needless deaths which result along the way. In Bhardwaj’s “Haider,” the title role (played by Shahid Kapoor) is unwavering in his determination to murder his uncle, Khurram (Kay Kay Menon), contending only with chance and circumstance. There is no fatal flaw in the character of Haider and no tragedy as such.

The tragedy in Haider is the tragedy of Kashmir, the backdrop against which this modern-day Indian adaptation is told. It’s no irony that we see elections being conducted in a land where the day’s rhythms are determined by curfews and where the call to prayer is drowned out by army loudspeakers. The tragedy is most poignantly rendered in Haider’s search for his father, one of the many “missing” fathers, sons and husbands in Kashmir. It is realized visually too through the film’s stunning cinematography, the pure snow of the valley speckled with blood, veiled by smoke, partitioned by barbed wire.

Kapoor captures Haider as a sensitive young poet in the earlier part of the film, but gives a less nuanced performance when Haider experiences episodes of madness. The stand-out performance in the film is that of Tabu as Ghazala who hauntingly portrays a woman torn by loyalty as a mother, a widow and a new wife. Kapoor and Tabu are supported by an excellent supporting cast, particularly Menon as Khurram and Narendra Jha as Haider’s father, Dr. Hilal Meer.

The film isn’t entirely stellar. The climax, while effective, almost turns comical with the transformation of three elderly gravediggers into militia men. The madness and suicide of the Ophelia-adapted character, Arshi (played by Shraddha Kapoor), is also so rushed that it never really sinks in. The tragedy though as Bhardwaj makes clear is not that of Arshi or even of Haider. In closing the film with Faiz Ahmad Faiz’ poem “Intesaab” (‘Dedication’), Bhardwaj’s “Haider” becomes a dedication to the congregation of mourning that is Kashmir, a tragedy awaiting its final curtain.