For more information
asia.ubc.ca under “events”
blogs.ubc.ca/punjabisikhstudies under ‘annual event’

Vancouver, BC (January 12, 2016) – Submissions are now open for the Dhahan Prize, the world’s signature prize in Punjabi literature. Authors who have published novels or short story collections in 2015 in either of the Punjabi scripts, Gurmukhi or Shamukhi, are invited to submit their works for the $25,000 CDN first prize. Two second prizes of $5,000 CDN will also be awarded.

Submissions will be accepted between
January 12 – March 15, 2016
Submissions can be made by the author between
January 12 – March 15, 2016
Guidelines and eligibility terms
dhahanprize.com/2016-submissions
Submissions should be made both electronically and in hard copy. Submit electronic version at
dhahanprize.com
Deliver two hard copies of the printed book to
Canada-India Education Society
Unit 1058—2560, Shell Road, Richmond, BC V6X 0B8 Canada

Based in Vancouver, Canada, The Dhahan Prize for Punjabi Literature was established in 2013 to recognize excellence in Punjabi literature, and to inspire the creation of Punjabi writing across borders. The prize is awarded at the international level each year to three books of fiction in Punjabi written in either of the two scripts, Gurmukhi or Shahmukhi.

The Dhahan Prize celebrates the rich culture and transnational heritage of Punjabi language and literature by awarding a yearly prize for excellence in Punjabi fiction. The Prize mission is to inspire the creation of Punjabi literature across borders, bridging Punjabi communities around the world and promoting Punjabi literature on a global scale. The prize was founded by Barj and Rita Dhahan, with support from family, friends, and the University of British Columbia (UBC). The Prize is awarded annually by the Canada India Education Society (CIES).

For more information, visit
dhahanprize.com
Or join the conversation
On Twitter or Facebook
For Media Interviews
Manpreet Dhillon
604-374-3274
contact@dhahanprize.com
..

The Centre for Culture, Identity and Education (CCIE),
University of British Columbia
http://ccie.educ.ubc.ca/

Black British Columbians:
Race, Space and the Historical Politics of Difference at the
US/Canada Border

DAY TWO
8:30am – 9:00am – Registration, coffee
(re) introduction of PLP and Conference – Handel Wright
9:00am – 10:25am Keynote Address and Q&A
Hopeful Crossings in Deep Waters: Navigating Memory, Spirituality, and the Meanings of Diaspora in a Black Woman’s Life – Cynthia Dillard
10:30am – 12:00 Plenary Session2:
Black Lives: Gender, Class and Method
‘There Ain’t Nobody Going to Do It for You’: The Work and Life Struggles of Black Working Class Women in British Columbia, 1910s to 1930s – Sherry Edmunds-Flett
What Manner of History is This? Beyond Naïve Realism in the Promised Land Project’s (Re)telling of the Underground Railroad – Handel Kashope Wright
12:00noon – 12:55pm Lunch
1:00pm – 2:30pm Session 4:
From Early Black Settlers to Contemporary Black and African British Columbians
The Black Pioneers: A Brief History of Early Black Settlers in British Columbia – Maryam Nabavi
To Be or Not Be African or Black or Not to Be Both: The Dialectics of the Politics of Identity, Group Solidarity and Factionalism Among African Canadians – Charles Quist-Adade.
The Construction of Self Identity: Struggles of the African Youth in the Diaspora – Thato Magkolane & Osage Omokaro
4:00pm – 5:30pm Keynote Address and Q&A
Setting the Scene: Accounting for Differences in Attitudes towards Blacks
Between the American and Canadian Pacific Northwest – Jean Barman

Background
On April 18th, 1858 in response to an invitation from the Governor of the Colony of Vancouver Island, Sir James Douglas, thirty five Black women and men left San Francisco aboard the ship Commodore bound for Victoria. When they arrived at Victoria Harbour on April 25th, they became the first Black people in the new colony, soon to be joined by six hundred additional Blacks, all looking to escape the overt racism, lack of opportunity and in some cases informal servitude of California for the promise of freedom, economic opportunity and citizenship in the Colony of British Columbia. There was soon a substantial Black presence in the Colony from Victoria to New Westminster, Kamloops to Salt Spring Islands, indeed enough to facilitate the establishment of the all Black Victoria Pioneers Rifle Corps (aka the African Rifles) in 1860.

Prominent figures included the businessman and deputy Mayor of Victoria Mifflin Gibbs; Louis and Sylvia Stark who were the first non-Aboriginal homesteaders on Salt Spring Island and their daughter, Emily Stark who was one of the first teachers in BC; Kamloops councillor John Freemont Smith; activists for women’s rights, Clarisa Fortune and Annie Norton; and dentist Allen Jones.

The presence of Blacks complicated the politics of difference in the Colony as working and romantic relationships and everyday interactions were negotiated between aboriginals, whites and Blacks in the Colony. Unfortunately much of that history and especially the historical and indeed contemporary presence and participation is largely marginalized in accounts about BC.

Vancouver takes considerable pride in its current multiculturality- its ethnoracial diversity, the common place nature of interracial and interethnic relationships and increasing mixed raced population. Strangely, the historicity of the politics of difference is eschewed in this presentist conception of BC diversity, including the substantial contribution of Blacks. Indeed, to return to the origin, most accounts do not acknowledge that Governor James Douglas, whose invitation resulted in the first wave of Black settlers in BC was himself multiracial: his mother was Creole and his father a Scotsman and furthermore, Douglas’ wife, Amelia was multiracial- aboriginal and white.

This conference on Black BC is a collaboration between the University of British Columbia’s Centre for Culture, Identity and Education and the Promised Land Community-University Research Project. With highlights that include keynote addresses by Jean Barman, Afua Cooper, Cynthia Dillard and Crawford Kilian, it brings together prominent community historians, youth activists and academics to address issues such as Black trajectories including the links between movements within Canada and historical and contemporary US/Canada border crossings; the lives and works of prominent male and female Black Pioneers; the significance of the African Rifles; interacial relationships, multiracial identities and the politics of difference in historical BC and the curious marginalization of the historical and contemporary presence of blackness in present day conceptualizations of British Columbia. This conference is intended to highlight the historical and contemporary presence of blacks in British Columbians, a presence that tends to be relegated to being an “absent presence.”
.
. 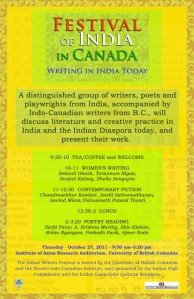 .
.
.
Festival of India in Canada
WRITING IN INDIA TODAY
Thursday October 27
9:30 a.m.-3:20 p.m.
IAR/Choi Auditorium
.
.
.
.
A distinguished group of writers, poets, and playwrights from India, accompanied by Indo-Canadian writers from B.C., will discuss literature and creative practice in India and the Indian Diaspora today, and present their work.

The Indian Writers Festival is hosted by the University of British Columbia and the Shastri Indo-Canadian Institute, and sponsored by the Indian High Commission and the Indian Council for Cultural Relation

The Third Annual Celebration of Punjabi
at UBC
In honour of the memory of Harjit K. Sidhu
Saturday, April 2, 2011

Arvind Mandair is Associate Professor and S.B.S.C. Chair of Sikh Studies at the University of Michigan. His recent publications include: Religion and the Specter of the West: Sikhism, India, Postcoloniality and the Politics of Translation (Columbia University Press, 2009); Secularism and Religion-Making (co-edited Oxford University Press, 2011); and Teachings of the Sikh Gurus (Routledge, 2005), co-authored and co-translated with Christopher Shackle. He is a founding editor of the journal Sikh Formations: Religion, Culture and Theory and is Assistant Editor of the journal Culture and Religion, both published by Routledge.

About Mr. Ravi
Ravinder Ravi was born on March 8, 1937 in Sialkot, in present-day Pakistan. His first book in Punjabi “dil dariā samundarõṅ ḍūṅge” or “The River of Hearts is Deeper than the Ocean,” was published in 1961. During his long literary journey, he has written 18 poetry collections, 12 poem-plays, 9 collections of short stories, one travel narrative, and two literary autobiographies, and has written or edited a dozen or more books of criticism or prose. He taught in Kenya, British Columbia and Punjab and retired from teaching in 2003. Today he lives in the British Columbia city of Terrance.
The decision to award Mr. Ravi this honor was made by a committee made up of representatives of the University and the B.C. Punjabi language literary community.

Mrs. Sidhu was born in Amritsar in 1937. She grew up in what is now Pakistan and resettled with her parents, brothers and sisters in Ludhiana after partition. She received both an MA and MEd. She went on to lecture at Sidwa College in 1966 and 1967. She immigrated to Canada with her husband, Balvindar Singh Sidhu, in 1968. The couple lived in the Yukon for 32 years, during which time Mrs. Sidhu’s passion became early childhood education. After the birth of her sons Ravindar (1971) and Rajvindar (1972), she worked as a teacher in multiple early childhood settings: preschool, prekindergarten programs and in kindergarten.

In 2001, Harjit and Balvindar moved to Vancouver where there youngest son was a practicing dentist and where, later, their oldest son started a career at UBC as a surgeon in the Faculty of Medicine. During her time in Vancouver, Harjit rediscovered her passion for Punjabi language and culture. She was a strong advocate for Punjabi culture, and for women in Punjabi society.

After two and a half year courageous battle with cancer, she passed away in her home on July 23, 2007. She is survived by her husband, two sons and their wives, two grandsons and one granddaughter.

Sincere thanks to the Sidhu family for making this program possible, and to the students, writers, and Punjabi cultural enthusiasts who contribute so much to the life of Punjabi in British Columbia.
Special thanks to Ranbir Johal of Kwantlen University; the Punjabi Language Education Association, its President Balwant Sanghera, and all its members; and to the members of the Writer’s Award Committee for their support, collaboration, and for making this event possible.