Poet Mazhar Tirmazi is visiting Canada to stage his acclaimed Punjabi play on 1947 partition of India at the University of Fraser Valley (UFV). The event is scheduled for this Sunday, October 8 from 2-3:30pm, as part of the UFV College of Arts Postcolonial Theatre Festival.

The play is titled ‘Umraan Langhiya Pabhan Bhar / A Lifetime on Tiptoes’. For details, view the links below:
UFV-MAzharTimazi-8 Oct
facebook.com/events/164035090817738

Mazhar Tirmazi will also present his poems at a reading on October 5th, 3-6pm, with local poets.

For more information about Mazhar Tirmazi, visit his blog:
https://mazhartirmazi.wordpress.com/
.. 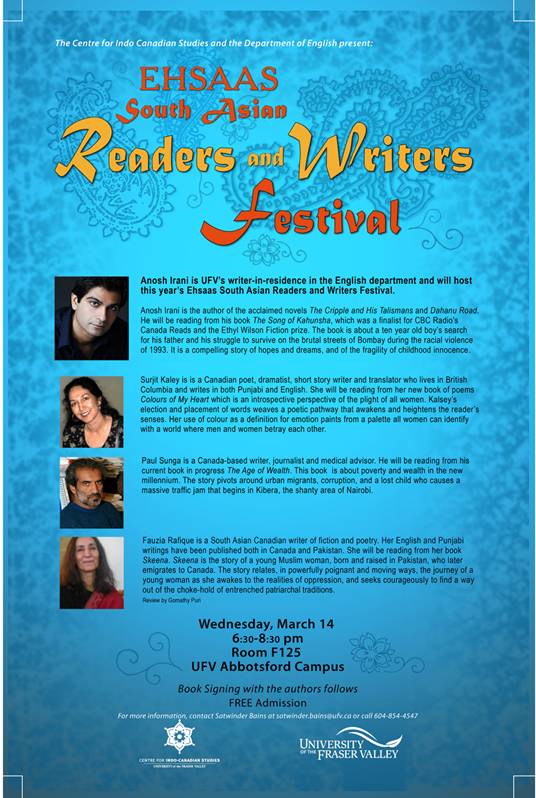 Anosh Irani
UFV’s writer in residence in English Department, he will host this year’s Ehsaas South Asian Readers & Writers Festival.
Anosh is the author of the acclaimed novels ‘The Cripple and His Talismans’ and ‘Dahanu Road’. He will be reading from his book ‘The Song of Kahunsha’, which was a finalist for CBC Radio’s Canada Reads and the Ethyl Wilson Fiction prize. The book is about a ten year old boy’s search for his father and his struggle to survive on the brutal streets of Bombay during the racial violence of 1993. It is a compelling story of hopes and dreams, and of the fragility of childhood innocence.

Surjit Kalsey
A Canadian poet, dramatist, short story writer and translator who lives in British Columbia and writes in both Punjabi and English. She will be reading from her new book of poems ‘Colours of My Heart’ which is an introspective perspective of the plight of all women. Kalsey’s selection and placement of words weaves a poetic pathway that awakens and heightens the reader’s senses. Her use of colour as a definition for emotion paints from a palette all women can identify with a world where men and women betray each other.

Paul Sunga
A Canada based writer, journalist and medical advisor, he will be reading from his current book in progress ‘The Age of Wealth’. This book is about poverty and wealth in the new millennium. The story pivots around urban migrants, corruption, and a lost child who causes a massive traffic jam that begins in Kibera, the shanty area of Nairobi.

Fauzia Rafique
A South Asian Canadian writer of fiction and poetry. Her English and Punjabi writings have been published both in Canada and Pakistan. She will be reading from her novel ‘Skeena’. ‘Skeena is the story of a young Muslim woman, born and raised in Pakistan, who later emigrates to Canada. The story relates, in powerfully poignant and moving ways, the journey of a young woman as she awakes to the realities of oppression, and seeks courageously to find a way out of the choke-hold of entrenched patriarchal traditions.’ (from a review by Gomathy Puri)

We hope to see you there.